Deboned. Ain't the best job in the world, but it worked.

Got 1 Tbsp minced garlic, 1 tsp lemon pepper and 1 tsp rosemary on the inside and salt and pepper on the outside. All tied up.

Tucked in a blanket of bacon, sprinkled with Big Ron's HoH and cookin' at 225 F. Sorry Ron didn't get a pic of that, but it happened.

What to do with the bone?

2 hours in. Added Lemon Juice and Rosemary over the Leg.

jarhead1970Member
Time to pull it for a rest. Total time ~6 hours. 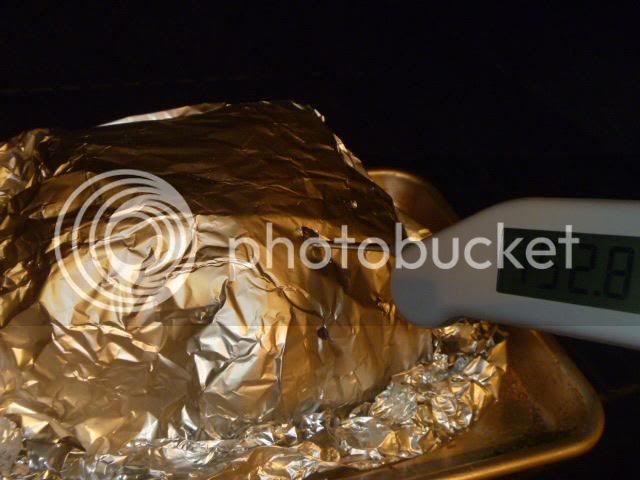 Had to have a taste test before slicing. Check out that smoke ring.

All sliced up. Really moist.

andyjMember
What time is lunch? If I leave now I might be able to get there in time!

jarhead1970Member
Thanks Andy, but it's not mine, except for what I used for quality control.

jarhead1970Member
Thanks Russ.
It's a local manufacturer and they are in a plain 40# plastic bag. I think they also do private label packaging. Not sure.
These were Red Oak Cooking Pellets. I was out of Hickory and Mesquite. Time to make a road trip.

Thank you Maine-iac for all of the compliments. I have learned so much from this forum, so I am happy to give a little back when I can. That's what it's all about.
5/17/121:48 PM
❤️ 0
vickibMember
Jarhead it looks like you did a beautiful job at deboning it. What a great looking end product. I have never tried goat. I would like to some day.
5/17/122:31 PM
❤️ 0

andyjMember
Goat is just a little on the gamey side. My daughter doesn't like it nor does she like venison, my son loves them both.
5/17/124:26 PM
❤️ 0

jarhead1970Member
Andy, make a French Dip and tell her it's beef.
Bet she couldn't tell the diff.

jarhead1970Member
Ouch is right.
Know anybody that raises them?
Got a small local packing house?
Feelers on CL as in WTB Baby Goat? Less than 50#.
Don't give out your ph#, just respond through CL.
You'll have a bunch of tree huggers calling you.
Got a sharp knife?
LOL.
5/18/1212:20 PM
❤️ 0
vickibMember
Yup, got a sharp knife, handgun, shotgun, rifle and a bow. Just aren't any free roaming here in NJ.

Although, now that you mention it, we are right next to farm country here and someone must be raising them for other than milk.

quote:
Originally posted by Vicki B:
Yup, got a sharp knife, handgun, shotgun, rifle and a bow. Just aren't any free roaming here in NJ.

Although, now that you mention it, we are right next to farm country here and someone must be raising them for other than milk.

Let ya know what we come up with!

I'm willing to wager that goat meat is a little easier to come by in your area than you believe. Goat meat is the most widely consumed meat in the world, but you need to think ethnic when sourcing it. The regions best known for their use of goat include Middle Eastern, North African, Indian, Pakistani, Mexican, and Caribbean. If you have ethnic population pockets nearby, check the local markets. Also, ask ethnic restaurants that serve goat where they get it. Caribbean, especially Jamaican, restaurants would be a good start.

I need to look for those ethnic pockets of population

Thanks for the great suggestions!
5/18/125:47 PM
❤️ 0
nysmokeMember
Vicki - You might want to try the farmers markets in your area. On my side of the river, the weekend farmers markets often have vendors from upstate New York who sell farm-raised meats. One of the farms that raises goat is Stone & Thistle, located in the Catskills. They sell at a farmers market in Croton-On-Hudson that is just a few miles North of the Tappan Zee Bridge. Here is a link to their site: Stone & Thistle Farm
5/19/128:14 AM
❤️ 0
vickibMember
Thanks nysmoke. I will look into it. I am fairly close to you. I forgot what part of ny because i did look it up when padre posted that map of our locations. We frequent the ny area and are only.like 40 min. from Warwick, we go to gander mountain which is less lqn an hour. and we go to the Renn faire whixh is less than an hour in sterling forest up in Tuxedo. We r right on the border of the nj counties that boarder Ny. We love it. I grew up in NY in Queens area though until I was 17...

We have thise markets here too. And all the farms are from Sussex Cty whuch is one that boarders NY.
5/19/129:01 AM
❤️ 0
dlsMember
Vicki - I was browsing through the NY Times archives for some goat info and came across a place you my want to check out. For some unknown reason I can no longer post links on the forum, but go to goatworldnj.com. It's located in Pittstown, NJ, which may or may not be close to you. They sell goats for breeding, show, as pets, and they also sell goat meat. Even if they can't help you they may be able to direct you to a local source.
5/19/124:05 PM
❤️ 0
vickibMember
Thanks dls. Gonna check it out.

Update: Just checked it out and they no longer sell goat me this year. I would have to place my order for next season.